“It's a different concept in our business. Normally, when [customers] come in they have an issue they need help with. So it's a challenge,” said Connie Wiezebicki, the owner.

Wiezebicki, who grew up on a farm in East Longmeadow, graduated from college with a degree in psychology and became a commissioned officer in the Army’s chemical core. In 1969, he opened Acres Power with one employee. Today, Acres Power employs 10 to 15 people, depending on the season.

“We grew because of reputation,” said Wiezebicki, whose daughter, Dawn Starks, is the general manager and, “an essential part of our success.” He said anyone can sell products, but Acres Power has a large service department, many of whom have worked there for over a decade.

“Big box [stores are] competitive, they sell the products, but we spend a lot of money on our employees. They’re top shelf,” Wiezebicki said. He said they service over 2,500 customers annually and know most of them by name. 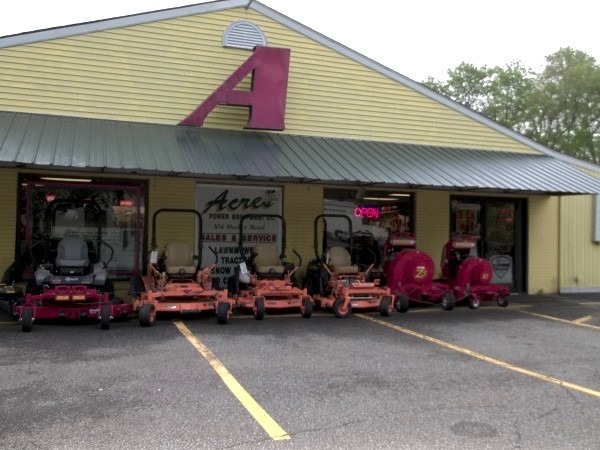 Wiezebicki said Cub Cadet is his best-selling line among homeowners, who make up approximately 60 percent of his customers. He said they’re very progressive in their engineering and receive high marks from Consumer Report.

The industry continues to change.

“We have become an industry where we’re not [servicing] just a spark plug or an oil change,” Wiezebicki said. People also have to worry about emissions regulations.

Wiezebicki predicts that, in under a decade, the gas engine will be phased out of most lawn equipment because electric options are getting less expensive with longer-lasting batteries.

The company has had its share of ups and downs over the decades. Wiezebicki said the business’s low spot came in the early 1980s when Wiezebicki had to borrow operating capital at 18 percent interest in order to remain open. Before that, in July 1976, the company suffered a major structural fire caused by battery explosion.

“With help from major contractors we were open for business in 30 days,” Wiezebicki said.

Acres Power had its biggest retail week in October 2011 when western Mass. was walloped with a major snowstorm. Acres sold 200 chainsaws in addition to snow removal equipment to customers who were digging out.

Although Wiezebicki is in his eighties, he still works every day.

“It's a challenge. Every day is new,” Wiezebicki said. “You have to have a mission. That's what keeps me going.”

Billy Goat’s 50th Anniversary: How the Company Grew, What’s Next