Home / Blogs / From the Desk of RLD / Excel Production Up 20%, New Products Soon to be Unveiled

Excel Production Up 20%, New Products Soon to be Unveiled

The past 2 years have meant new product introductions, awards and a new retail marketing strategy for Excel Industries.

Rural Lifestyle Dealer was on hand when Excel introduced its Raptor lineup in September 2012 and again when Kansas Gov. Sam Brownback recently recognized the company as exporter of the year.

While following along with the governor on a tour of the plant, we talked with Adam Mullet, who recently was named vice president of sales and marketing for the U.S.

Overall, the company has grown by about 25% each year for the past 2 years and topped $210 million in sales in 2013. Excel serves 32 countries through a global distribution network of more than 2,000 dealers. Its biggest overseas markets include Australia, Canada, New Zealand and Western Europe.

The exporter award comes during the year Excel’s Hustler brand celebrates its 50th year in business. Paul Mullet, Excel president, says that 50 years ago, then Gov. John Anderson, Jr., came when the original section of the factory was built.

“I’d like to extend an invitation for the governor to come back and visit us in 2064,” he says. 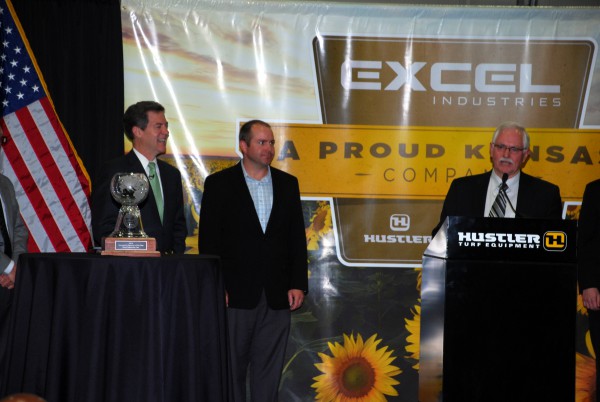 Paul Mullet, Excel Industries President, addresses employees during a celebration at which Kansas Gov. Sam Brownback presented the company with the 2013 Kansas Exporter of the year award. From left, Brownback, Adam Mullet, vice president of sales and marketing USA, and Paul Mullet.

Chad Lane, vice president of global and emerging business, says Excel decided in 2004 to make international business a bigger part of its growth strategy. “That was the start of us putting more resources into business development for export.

“Like many small to mid-sized companies, when we first started our export business, we had a big learning curve to overcome. It can be quite a daunting thing. It took a lot of years working with our distributors, learning best practices and developing global distribution. Now, we’ve got that in place and we’re taking the business to the next level,” Lane says.

He says Excel is also adapting its export strategies beyond the distribution model. “In January of 2012, we set up a subsidiary that allows us to work directly with the dealers in Canada. This allows us to better serve and supply the market and grow our business in Canada.”

Mullet says that dealers are part of the export award, despite the fact that they aren’t selling internationally.

“Dealers are the foundation of what we do. Without the dealer base, we’re just building good products. I hope it helps them have a sense of pride in the brand,” Mullet says. 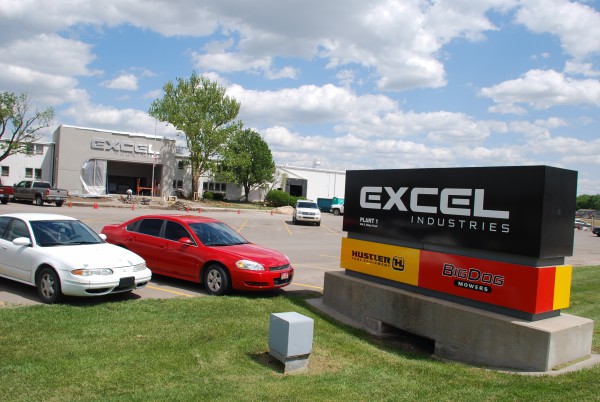 A new entrance for Excel Industries’ headquarters is under construction. The company has seen growth of 25% each year for the past 2 years.

Mullet shared his thoughts about the company’s other growth strategy, to enter big box stores, in a recent interview with Rural Lifestyle Dealer. What’s on his mind these days is finalizing new product introductions for the Hustler Days dealer event, September 23-24, Orlando, Fla., and at GIE+Expo, October 22-24, Louisville, Ky.

Mullet wasn’t yet ready to share specifics and says he avoids words like “revolutionary,” but he did share this: “It’s brand new technology that’s never been done before and we have a patent pending.”

The products are targeted to the upper end of the residential market. He says their research shows the products and technology can become a larger part of Hustler’s strategy as opposed to just filling a niche. Mullet says the company is committed to more new products over the next 5 years. “You can spin your wheels all day doing product enhancements, but you’re not really getting anywhere. When you introduce new products, that’s where you see growth.”

As always, dealers, please share your thought about strategies such as these and how they might influence your dealership, regardless of which lines you carry.

Hundreds Sign Up to Be Listed on Propane Dealer Point

6 Steps to Pump Up Your Sales Pipeline