Home / Blogs / From the Desk of RLD / Shooting at Excel Industries: Looking Back & Moving Forward

“Don’t think it can’t happen. Accidents can happen. Things out of our control can happen.” That’s what Paul Mullet shared with me during a recent conversation. Mullet is one of the owners and retired CEO and President of Excel Industries Inc., a manufacturer of outdoor power equipment.

We were talking about a recent dealership accident in which two service technicians died. I reached out to Mullet because I knew his perspective would be so important for dealers who are coping with crises of any scale.

Mullet and Excel Industries faced an unimaginable crisis the afternoon of Feb. 25, 2016 at its Hesston, Kan., headquarters when an employee shot and killed 3 employees before being shot and killed by a police officer. Here’s an excerpt from a Wichita Eagle news story about the incident:

The first shootings were reported late in the afternoon in Newton, Kan., where the man shot at two people, injuring one of them. He stole their vehicle and proceeded to Hesston, which is 8 miles north of Newton, where he shot another person on U.S. 81.

The man then proceeded to Excel Industries, 200 S. Ridge Road, Hesston, shooting one person in the parking lot prior to entering the building, where he continued shooting. A police officer entered the plant, shooting and killing the man at about 5:45 p.m., according to reports.

Rural Lifestyle Dealer is placing a special focus on developing safety articles this year. Go to www.RuralLifestyleDealer.com/SafetyResources to access the archive of safety information.

In all, 4 employees died, including the shooter, 12 other Excel employees were injured and the entire Excel organization was affected. Mullet addressed media during a news conference that evening, sharing his condolences and saying, "We're going to do what we can to take care of them and bring them through this tragedy."

Here’s how they followed through on that promise.

Mullet says, “Our first priority was our employees, taking care of them financially, emotionally and mentally.”

Those challenges were compounded by the fact that employees working at the time had fled, leaving behind purses, mobile phones, cars, etc., and the building was a crime scene that was off limits for 3 days. There was also the chilling realization that some of those items belonged to those who had died.

Excel already had an employee assistance program, so they contacted mental health providers to get them involved, including local experts who were part of and understood the community and national professionals with expertise in mass shootings. They communicated with employees through a hotline that was already in place for employees to call for information regarding plant shutdowns. They held three off-site meetings the following Tuesday, segmenting the employees into smaller groups.

Mullet says the employees had many different emotions. Some were not on site, while others witnessed the shooting. Some wanted to get back to work, while others said they needed more time. The initial meetings were informational, not interactive, but they provided a forum for employees who scattered during the event to come together for the first time. Employees stayed after the meetings, interacting with each other and with the leadership team. One employee who had been shot 4 times attended the meeting, which uplifted and inspired a lot of people, Mullet says.

“There was evil done at the plant and we wanted to take back our plant. We wanted to get the message out to them that this is our plant, this is our livelihood. We’re not going to collapse because of this. We’re going back to work and be stronger,” Mullet says. 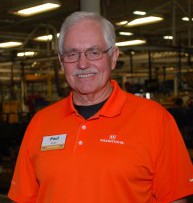 Paul Mullet is one of the founders of Excel Industries Inc. and recently retired as president & CEO.

They reassured employees they would be paid while the plant was closed, and they even paid employees for overtime that was planned during the time the plant remained closed. “That really helped from the standpoint that we had their back and we were going to recover from this,” he says.

Throughout this time, Mullet says they continued to support law enforcement and sought the support of their legal counsel as well as a crisis communications firm as they fielded media requests and dealt with many issues. Friends, customers and dealers around the world sent their support through emails, phone calls and through social media.

The employees also banded together for support, coordinating candlelight vigils for those who had died and hosting barbecues to bring people together.

The leadership team was able to enter the building 3 days after the shooting and the plant was back in production 2 weeks afterward. The incident had caused physical damage and they worked to eliminate anything that would remind employees of the incident. For instance, they painted the area to brighten things up. They added security measures and hired on-site crisis management and mental health professionals for each shift as employees returned to work.

On the first day the plant was opened to employees, they intentionally didn’t make any products and allowed employees to enter the facility with their families or clergy members and reunite with co-workers. They also started production on a Thursday, so employees only had to work a few days before the weekend.

The city of Hesston’s ministerial alliance organized a church service for the victims and came to the facility for a blessing. “We spent 3 hours walking through the plant and took the route of the shooter. For me, it was a real healing process,” Mullet says.

There were signs of hope as well. During the blessing, when they left the area of the first fatalities, the wall clock read 3:16. For Mullet, that was a sign for the Bible verse, John 3:16, “For God so loved the world that he gave his only begotten Son, that whosoever believeth in him should not perish, but have everlasting life.”

“It gave me hope and positivity that maybe there will be some good to come out of this,” Mullet says.

As I talked with Mullet, I was struck by his humbleness. He led the family company through a worst-case scenario that I’m sure forever changed the company and its employees. They stood by their employees, with almost all of them returning to work.

Excel made it through this test of fire by keeping its focus on employees and by doing the right thing, whether it was facing the television cameras, working with law enforcement or providing what employees needed to cope, whether it was mental health resources or just the simple routine of a work day.

Here are other takeaways and immediate “to-dos” that come to mind from Mullet’s comments:

Appoint a team right now to develop or re-evaluate your dealership’s crisis plans. (This article can get you started.)

Be willing to be the face of leadership. Rely on legal counsel, but also know that your employees and community need you to communicate.

Understand that some employees may need longer to recover. Be sure you understand what your insurance allows regarding leave and what options are available for mental health support.

Be open to support from others. The tendency for many after a tragedy is to separate themselves, but that is not an option for a dealer principal. Seek the support you need from professionals and be open to what family members, employees and your community offers.

Finally, believe that things will get better over time and seek good out of tragedy.

Leading During a Crisis: The Shootings at Excel Industries