By Tim Brannon posted on October 10, 2022 | Posted in Best Practices

As we stated, we have been blessed to have rubbed elbows with some iconic personalities in the ag equipment community.

A super salesman, Kevin Bein was one of these iconic persons in marketing. Kevin pioneered marketing the Fendt tractor to North America and later pitched the Super Series Gleaner. He did the RFD-TV programs and was loved by customers, his dealers and even the competition. If you look up the word 'fireball' in the dictionary — you would find a picture of Kevin Bien. Studying and copying his success would be beneficial, I promise.

There was a book written by the marketing firm of Snowden-Tatarski entitled You’re Not Getting Any of This, Are you Richard? It is a great short history of "The Biener" as he was affectionately known. We wrote part of a chapter in the book and I wish to share this. We lost Kevin a few years back; those who knew him still tell his stories whenever we meet. 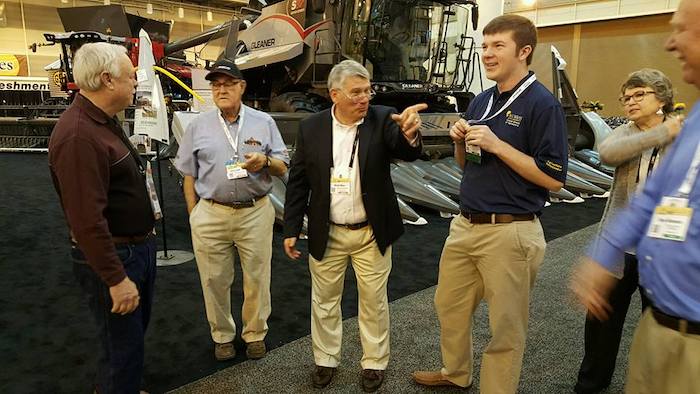 Kevin Bien, center, is remembered as an icon in the farm equipment marketing world.

During a company golf tournament at an awards trip we were alphabetically paired with Kevin Bien. We were the lead cart in a shotgun start.

As we strapped in the clubs Kevin popped down in the passenger side seat and started a check list of golfing items. A young lad who was our tourney director yelled for our attention and began his list of do's and don'ts and golf rules for our outing. Kevin turned around to see who was paired with certain company 'big wigs' who had an affinity for winning these things and made a comment or two concerning that fact.

The young man with the clipboard was about half way through his spiel when Kevin turned to me and said "Uh- oh, I got a problem.” "What's the matter Kevin?" I ask. To which the Biener, who seemed to be turning 51 shades of gray replied, "Man my stomach is killing me I gotta go (I am not going to use the word he loudly purveyed but it rhymes with spit).” I shhh'd Kevin and said we are about to start, the bathroom in the hotel is a half mile away, can't he just hold it? To which Kevin reiterated in a voice that was only Kevin's the same demand to relieve himself — and NOW. I told Kevin the best bet was the Port-a-Potty on the driving range. He said "let's go.”

I told him just wait a second, the young man with the clipboard and boring instructions was finishing up, then we could go. What we did NOT hear during our conversation about Kevin's impending bodily function emergency was that the young tourney guy had repeated over and over — "Whatever you do — follow the lead cart to the course!" He then yelled, with an arm flourish, “Let the game begin!”

We did a burnout start, leading the troupe of 36 golf carts about 20 yards toward the course then we turned left to the port-a-potty with Kevin now sporting a greenish facial tint, holding his tummy screaming the desires of his intestines. THIRTY FIVE golf carts were following us and turned left as well following Kevin and I to the portable privy. The young man with the clipboard watched in horror, then chased us in hot pursuit on foot trying to stop each cart he passed. It was a mess.

Carts he yelled “stop” to were turning around in the flower beds adorning the manicured cart paths, getting stuck on the concrete parking blocks, and heading off in various directions where they thought they should be going. As Kevin emerged from the faded pea green out house, the young man ran up to him and as Kevin was adjusting his belt, yelled “YOU have ruined my tournament!” then slammed down his clipboard and proceeded to stomp on it.

One cannot make these things up, they just happened to the Beiner. Kevin, being the professional he was, put his arm around the young fellow’s narrow shoulders and said, “Hey listen man, things are OK, we’re gonna have fun, that’s what this is all about, right?” “Now let's go play golf!”... and we did ... leaving the director standing at the outhouse.

We did not win. We did have more fun than anyone else on the course. Kevin was not a great golfer, he did leave more divots than he ever dug with the backhoes he sold. The finish was in the 19th hole bar, where Kevin told the story of his leadership to the outhouse several times, louder each time til we were asked to “hold it down,” which to my memory, never happened with the Biener. Every time we saw each other afterward, it involved a hug, and “We gotta play another round of golf.” He then would seek out someone to retell the story. What a leader, what a salesman, what a man. At work or at play his motto was “Faith, Family and Friends.” May he rest in peace. Until next time — wishing you smiles and prosperity.