John Deere, looking to sell tractors and lawn mowers during spring, has added "want" and "own" buttons to its Facebook page, allowing consumers to express more specific interest levels in particular products. For instance, with either "want" or "own," Facebook users can virtually fill in the following blanks: "I ____ the John Deere 1 Series sub-compact utility tractor"; and "I ____ the John Deere H120 loader attachment". 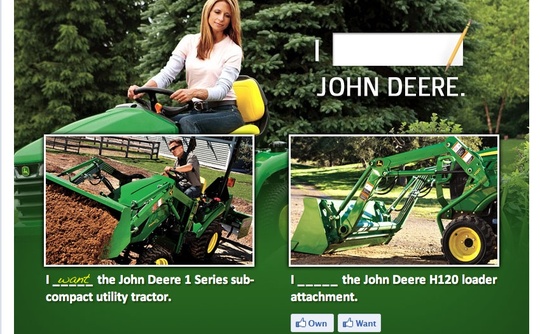 After they select one of the two buttons via the brand's "Deere Season" app, they are offered a message slot where they can describe why they want or own the tractor. The message then posts to their Timeline. If the person's Facebook friends tap a link in the post, they are taken to the product's details page on JohnDeere.com. There, consumers can request a price quote for the tractor.

David Niederkorn, a marketing rep for the Moline, IL-based firm, said the brand is running Facebook ads that push users to the app, while also buying paid promotions on the social site for seasonal specials. He said other verb buttons such as "love" and "crave" would be appearing in the brand's Facebook efforts.

In an email to ClickZ, he explained how the Facebook app could drive sales at local dealers. "[It] will support John Deere dealers by inspiring new and existing customers to consider, explore, and perhaps purchase or upgrade existing equipment, " he said.

While brands for the last several months have been able to permit more action verbs to their Facebook pages, John Deere appears to be one of the earliest major companies to test the engagement features. The 175-year-old brand has 1.1 million Facebook fans/likes.

Meanwhile, Niederkorn suggested that his actions-based app could have customer relationship management (CRM) and product development benefits. "[It] also supports John Deere's commitment to listening and responding to customer feedback," he said, "since fans will be able to share a wide range of testimonials and product feedback."