Several key economic statistics support dealers’ optimism. Market growth is one of those factors with nearly 50% of dealers saying their number of rural lifestyle customers has increased 5-19% in the last 5 years.

Current homebuilding surveys are positive, according to the National Assn. of Home Builders/Wells Fargo Housing Market Index. The December index came in at 70, with any number over 50 indicating more builders viewing conditions as good than poor. The unemployment rate has held mostly steady throughout the year, with the Bureau of Labor Statistics reporting 4.7% for December.

The Assn. of Equipment Manufacturers reported that November U.S. retail sales of farm tractors under 40 horsepower were up 22.6% compared to last year, with year-to-date gains of 11.7%.

Let’s dissect the numbers to see what’s driving the optimism and what opportunities await you in 2017.

More than 40% of dealers expect their total revenues to increase by 2-7% this year, with more than 8% expecting growth of 8% or more. A solid 35% expect revenues to be on par with 2016. These numbers are good, but tempered a bit from last year’s survey. 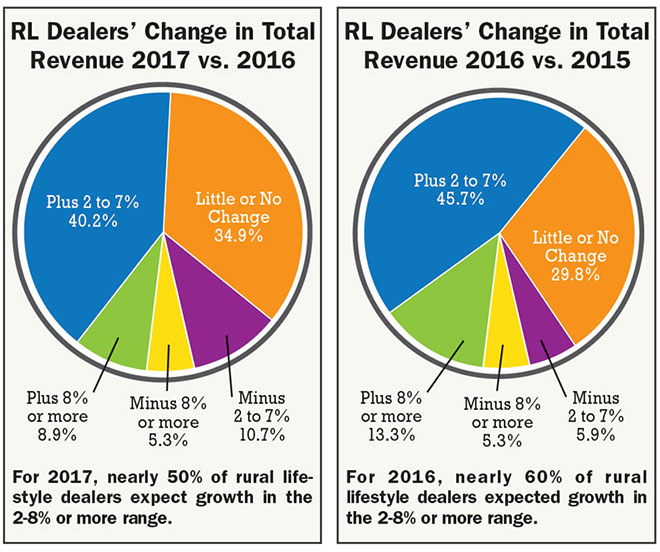 Some dealers are more pessimistic about 2017 vs. last year’s survey. More than 10% expect revenues to be down 2-7%, with more than 5% expecting declines of 8% or more.

A new presidential administration in the U.S. means changing policies. Which of these new policies could help or hurt your dealership? Ernie Goss, Ph.D., MacAllister Chair and professor of economics at Creighton University, shares his thoughts on policy changes and the overall economy.

“There are several policy changes that are very likely and one of them is on the fiscal side. There is going to be a cut in corporate tax rates on repatriated earnings, or earnings of U.S. firms held abroad. What does that mean to rural America? The conversion of these foreign earnings to U.S. dollars will mean the value of the dollar will be increasing and that will tend to put downward the pressure on ag commodity prices. That will be a strain on dealers that sell to farmers,” Goss says. Those weak commodity prices will continue to spill over to the broader economy. However, he says the outlook for rural lifestyle equipment dealers looks reasonably good based on other factors, including job growth.

Another area to watch is interest rates. Goss expects short-term interest rates to rise 0.5% in the first half of 2017. He says small businesses that are considering borrowing may want to do that now rather than waiting.

Long-term interest rates (such as for mortgages) are more difficult to forecast. However any increases would affect residential, commercial and industrial building. Related industries, such as landscape contractors, would then be affected as well.

“On the flip side, it’s likely the new administration is going to do something about infrastructure spending as early as the first half of 2017. That would have spillover impact on related industries,” Goss says.

Paying for those infrastructure improvements could come from reducing tax deductions as opposed to increasing tax rates, although which deductions will be targeted are still unknown. However, Goss expects the Section 179 Deduction for equipment to remain.

These forecasts are slightly less optimistic than the strong numbers reported in 2016. In that survey, about 54% of dealers expected increases of 2-7% and more than 9% expected aftermarket increases of 8% or more. 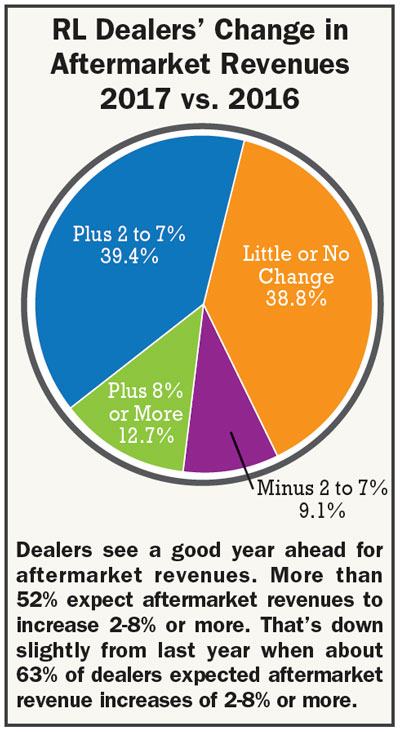 This market growth rate is similar to what dealers reported last year, when 52% of dealers said their customer base had grown 5-19% and 16% reported a growth of 20% or more. About 7% reported a decline of 5-19% in the 2016 survey and none of the responding dealers reported any losses above that level.

Rural lifestyle equipment dealers serve a varied customer base. For instance, most of the dealers in the survey (94%) cater to hobby farmers and large property owners. About 83% sell to municipalities and parks as well as to landscape contractors; and 76% sell to production farmers. (Refer to the chart "Breakdown of Customer Segments" for details.) 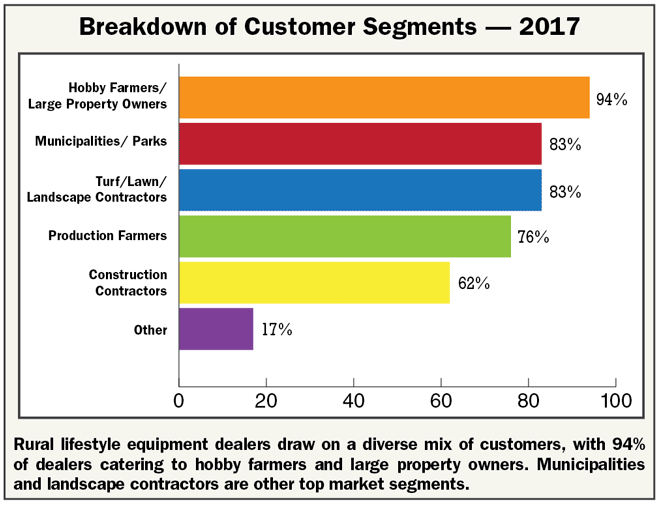 An area where dealers are holding steady is marketing equipment through a rental department. This year, 38.5% of dealers say they have a rental department and last year, 38.4% said they did. For those offering rental, the top 5 categories rented include tractors 40-100 horsepower, skid steer loaders, tractors less than 40 horsepower, backhoes and tillers. (See the table "Product Categories Rented" for an expanded list of top rental offerings.)

What’s the Best Mistake You Have Ever Made?

In the 2017 Dealer Business Trends & Outlook survey, we asked dealers to tell us about the best mistake they ever made — and how that mistake ended up benefiting the dealership. Here are highlights of the responses.

“We would try and source any brand/product someone wanted and then tried to support it. We tried to be everything to everyone. This just set us up for failure with the customer and the business. We reviewed our inventory turns, revenue and margins per vendor and reduced as needed. We then put a database together for all staff to see showing brands we now support with stocking parts and warranty information. We still service most brands.”… “As a small business, it becomes common practice to take shortcuts. We learned the hard way on how some ‘old school’ business practices can impact the financials, valuation, etc., of a business and the importance of running a tight ship if the dealership is on a growth trajectory.” … “It was a huge mistake to not have a plan for handling employees. In the past 3 years, we have developed and continue to finetune how we engage employees. We have job descriptions we hire from and use them when we evaluate our employees. We have also added incentives. Taking the time to really manage our employees has made a big difference for us.” … “I think the biggest mistake we made was believing that a mainline supplier is there to help the dealer and customers and that we can’t survive without a mainline. A year ago our mainline supplier terminated our agreement. Initially, we thought ‘Now, what?’ Make no mistake, our wholegoods and parts sales have declined, but our service department revenue is increasing. Rental revenue is increasing as well and our margins are getting better. We have a few shortline suppliers now that are great to work for; our business stress has declined dramatically; and our focus now is more about supporting our customers rather than supporting the supplier.” ... “Firing an employee that everyone said we couldn’t survive without. We replaced him with an employee that has a positive attitude.”

In the weighted average perspective for the top 5 categories, (looking at increases vs. declines), the unit sales potential for zero-turn mowers and utility vehicles are down from last year’s averages. Tractors under 40 horsepower and front-end loaders are up vs. last year and rotary cutters are about the same. (See the table "Weighted Average Perspective" .)

The weighted averages for the bottom 5 categories for sales potential — spraying equipment, manure spreaders, ATVs, feed and fencing — are all down from last year.