Which Has More Potential, Autonomous or Electric Tractors?

By Dave Kanicki posted on March 31, 2017 | Posted in Product Innovations

The rollout of their autonomous tractors at the 2016 Farm Progress Show in Boone, Iowa, garnered Case IH and New Holland a lot of attention for several weeks. (See Ag Equipment Intelligence, September 2016.) The Case IH ver­sion is a cabless vehicle utilizing the brand’s Magnum tractor platform. New Holland’s model called the T8 NHDrive, is outfitted with a cab, but is fully autonomous.

The prototype produces 130 kW (174 horsepower) of continuous power and is based on the 6R Series tractor chassis, using an adapted DirectDrive stepless transmis­sion, with a speed range from 3-50 kph (2-30 mph) at full power. The tractor is emission-free and develops high torque at low speeds and a maximum output of around 400 horsepower.

The introduction of these technically advanced farm vehicles begs the question: In the long run, which of these tractors holds more possibilities for farmers, dealers and the manufacturers?

No estimates for potential growth and revenue have been offered for electric tractors, but according to Tractica, a market intelligence firm that focuses on human interac­tion with technology, revenue from driverless tractors would reach $30.7 billion by 2024.

When it comes to self-driv­ing vehicles, Kraig Schulz, co-founder, president and CEO of Autonomous Tractor Corp., says the real question is what level of autonomy do farmers really need? He believes a “Tesla for tractors,” is the best bet for the ag industry; most likely a semi-autonomous, electrically powered vehicle.

“Rudimentary autonomy that must be observed or man­aged by someone in the vehicle is on one end, and more complex, self-sufficient autonomy is on the other. Maybe down the road we will see tractors that have already gone out and plowed the field and come back while you’re still getting your second cup of coffee, but for now the autonomy we see in farming still requires a certain level of supervision. Autonomy in the truest sense is something that functions completely on its own — something I don’t think we will see broadly adopted among row-crop pro­ducers any time soon.

According to Schulz, between 1975 and 2012, the purchase cost of machinery and its repair have both about doubled. “These rising costs in equipment and maintenance, and limited improvement in fuel efficiency have led to almost con­tinuously rising production costs for farmers over the last 25 years,” he says.

Schulz believes electrification might be an answer to rising equipment costs. “Electric tractors would get better fuel economy, have an increased longevity and reduced repair costs — all facts that have been proven by the automo­tive world. Electric drive technology has been adopted by the marine, locomotive and mining industries, but not in ag. Isn’t it about time our industry started moving to a more cost-effective solution like electric drivetrains?”

He says Tesla automobiles are a good example that dem­onstrates how electric tractors would be an improvement for farmers. “An electric vehicle has only a small fraction of the moving parts of a mechanical or hydraulic vehicle,” Schulz explains. “Since the whole system becomes digi­tized, the communications systems can be dramatically sim­plified, eliminating hundreds of wire connections. Using fiber optic cables alone can reduce most of the wires in a tractor to just one cable.”

He adds that advances like these can translate into real dollars for producers. According to Schulz, a Tesla retains better than 70% of its value after 50,000 miles while tra­ditional cars lose 70% of their value. Part of the reason, but not the only reason, for this disparity is the average expected lifespan of an electric motor is 29 years, which is two times the average lifespan of a traditional tractor. “Farmers would benefit greatly from equipment with lon­ger lifespans and less frequent need for repair.”

He points to the improved fuel efficiency with electric vehicles as another benefit. A gasoline-powered vehicle gets roughly 35 miles per gallon, Schulz says. A hybrid gasoline and electric platform would increase efficiency by about 30%, and moving it to a completely electric platform would increase it significantly more. “Simply put, transmis­sions aren’t that efficient and electricity is a much more efficient way to transfer power.” 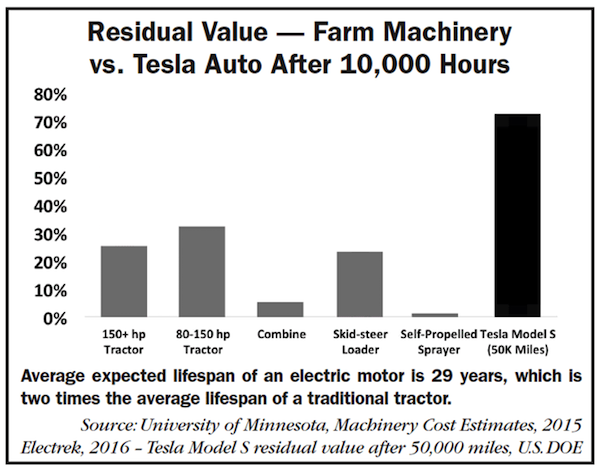 Like the Tesla, the biggest drawback to electric drive platforms is the vast majority of electric systems use batteries. “This works well for the Tesla design since most of the time a driver will only use the Tesla at a fraction of its full horse­power and is used only a few hours each day,” Schulz says.

“Teslas today carry about 100 kilo­watt hours of batteries, but even just a 200 horsepower electric tractor would need about 1,500 to work for a full day. Batteries alone would cost farmers about $350,000 for this hypothetical electric tractor, not to mention the battery pack would also weigh more than the tractor.

“The world is moving to electric vehicles. It might be more gradual, but it will make its way to farms and change the industry,” Schulz predicts.

“Semi-autonomous equipment seems to be the answer,” he adds. “Equipment that operates independently enough that the farmer can be within reasonable distance to intervene when a problem occurs is more realistic than fully autonomous equipment.”

Further, Schulz explains, if the equipment is semi-auton­omous, a tractor may not be needed to pull it. And it prob­ably would not need a cab. “Why wouldn’t the power and mobility be integrated into the implement itself in a modular fashion that can be moved from implement to implement?

“With an electric drivetrain this is possible — providing even better control of the implement and driving down even further the cost of equipment. Fully autonomous equipment might not be as necessary as we think it is,” Schulz says.