By Lynn Marcinkowski Woolf posted on May 16, 2016 | Posted in Rural Lifestyle Market

Dealers are in the middle of two converging trends. Manufacturers are producing more efficient, more powerful and lighter weight battery-powered equipment for commercial customers and consumers. And a segment of users, specifically municipal and institutional customers, are seeking alternatives to gas-engine powered equipment because of their concerns over the environment and the health of andscape workers.

Dan Mabe, CEO and president of the American Green Zone Alliance (AGZA) and a former lawn care professional, says “The transition is happening. It’s very wise and prudent for dealers to jump on board and embrace the technology. They need to empower themselves now to understand the technology.”

AGZA is a for-profit, member-based organization that promotes zero-emission grounds maintenance strategies. Its initiatives include:

Mabe says dealers may be reluctant to promote battery equipment for several reasons. First, it’s human nature to resist change. However, he says battery powered products have moved into the mainstream. “In the last 5 years, the technology has gone from being borderline, where we had to deal with compromises, to today where there’s been a revolution in the technology — from Tesla cars to laptop batteries, all of which have benefited the lawn and garden industry.”

Another benefit for equipment owners is the reported lower service and maintenance requirements and Mabe says that may lead to resistance from dealers whose service revenues would be adversely impacted. He says generally that battery-powered equipment requires 1/25 of the maintenance of gas-powered engines, with its filters, spark plugs, gaskets, etc.

This shift could be an opportunity for dealers, though, who repeatedly tell us that it’s difficult to find service techs. Perhaps dealers who expand their offering and expertise of battery-powered equipment could bolster their role as consultants, advising commercial customers and consumers about how to make the switch. You’ll want to brush up on some of the purchase incentives that may be available. For instance, some equipment may qualify for federal tax incentives or manufacturer rebates. AGZA has some rebates available for members on certain equipment.

Mabe says the education factor is critical to the adoption of battery-powered equipment. “It’s not a matter of just handing it to users and saying, ‘This will be better for you.’” This is why AGZA emphasizes its certification and accreditation programs to build long-term acceptance of battery technology. 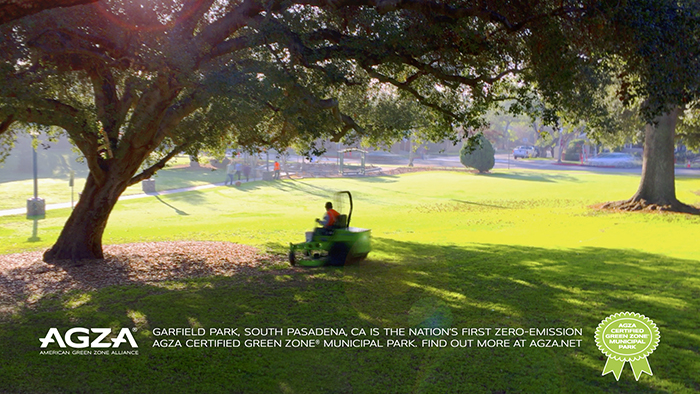 AGZA is based in Los Angeles, Calif., and has worked with numerous institutions and municipalities throughout California. One recent success is with Garfield Park in South Pasadena, which achieved Congressional recognition in 2015 as the first zero-emission AGZA Green Zone Municipal Park in the U.S. (View additional information.) AGZA is finalizing certification this summer to make the entire city of South Pasadena the nation’s first zero-emission AGZA Green Zone City.

Mabe says they also have efforts underway with municipalities, lawn care companies and others in New York, Massachusetts, Florida and Minnesota. They are researching how to integrate their education efforts with dealers. “We want to start some kind of program for dealers where they can easily locate information about how to make an effective living selling battery-powered equipment and how to get the equipment to the right people.”

Go here to learn more about AGZA and its programs.