What Rural Lifestylers Want From You

The city of South Pasadena, Calif., was recently named the first American Green Zone Alliance (AGZA) Green Zone City in the U.S. This means all of the city’s 13 properties — comprising 41 acres (including 21 acres of mowing); 15 acres of hardscapes; 1 acre of hedges and more than 7 miles of edging — are maintained with battery-powered mowers, trimmers, edgers, hedgers and blowers.

Data gathered by AGZA and the landscaping crew helped that vision become reality as it demonstrated that today’s battery-powered equipment matched the productivity of gas-powered equipment.

AGZA, based in Studio City, Calif., has been consulting with the city for several years on sustainable grounds maintenance strategies. The organization educates and accredits commercial grounds maintenance crews and certifies properties maintained with quiet, cordless electric equipment as AGZA Green Zones.

Joe Espinoza, branch manager of TruGreen Landcare (now known as Landcare), was in charge of the crew maintaining the South Pasadena account. When he supervised the Landcare crew, they used Exmark and Toro mowers, STIHL blowers and line trimmers and Echo hedge trimmers. Espinoza says the city previously had not mandated what kind of equipment to use. However, the crew kept noise levels in mind when they worked near schools.

“South Pasadena is very cognizant of the environment for their children and their community. Garfield Park is a very heavily visited park with a lot of walkers and kids. The battery-powered machines would go right by children and dogs and they wouldn’t notice it. The low noise level was very impressive. I began to think that this equipment was not just an alternative, but an option,” Espinoza says.

Espinoza knew it would take more than a demonstration to move forward with a new approach to landscape management. For 6 months, he tested a 60-inch Mean Green zero-turn mower against an Exmark 60-inch zero-turn mower. 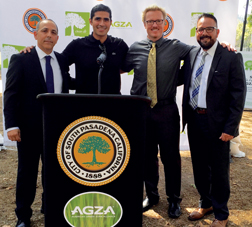 Early in the study, the data was showing a 90% production comparison, and Espinoza asked the operator how he was using the equipment to better understand the numbers. “I learned that he was not as aggressive when operating the battery-powered equipment. The operator thought he needed to slow down when using it. I wanted him to operate it as if it were gas,” Espinoza says. The operator followed his advice, and the performance figures soon were nearly identical to the gas-powered equipment.

AGZA supported Espinoza throughout the project as city leaders set their sights on Garfield Park becoming the first zero-emission AGZA Green Zone municipal park in the U.S. That goal was achieved in February 2015.

The green landscaping program was then expanded to the entire city and this past September, the city of South Pasadena earned recognition as the first AGZA Green Zone City in the U.S. All grounds maintenance on its municipal properties — mowing, hedging, edging, trimming, sawing and blowing — are serviced exclusively with low-noise, zero-emission battery-powered electric machinery and manual hand tools.

Support landscapers with advice and data about battery-powered equipment to help them secure new accounts.

Understand the operational benefits of green equipment along with the return on investment of potentially higher priced machines.

Step up efforts to demonstrate battery-powered equipment on site and be willing to let commercial customers do their own tests to verify the results.

“The Greenstation was instrumental in every step of the process, including loaning equipment for various production tests. Without The Greenstation’s support, the project would have died out as senior management did not want to proceed. They allowed us to continue our efforts to test and study production and finally achieve the goal of creating the first AGZA certified municipality,” Espinoza says.

Espinoza continued to track other metrics to validate the battery-powered equipment. “The cost of the green equipment varied from 30% to almost a 50% increase over gas-powered equipment. The ROI, however, was approximately 9 months for the 60-inch mower and about 3-4 months for the smaller hand tools. Gas and oil were eliminated along with the loss of production if a crew member had to clean filters or refuel in the middle of the day,” he says.

In terms of operations, Espinoza says, “There were no challenges outside of workers using the equipment as fragile instruments. They were given direction to utilize as if it were gas and not be so docile. They did, and production was met.”

A mechanic was trained on how to repair the machines, and they only had to turn to The Greenstation once for assistance. “Part of the beauty of the green equipment is that it’s modular. If a battery or motor goes out, you just swap it out. It’s much better than when a gas mower goes down and you have to wait for parts,” Espinoza says.

Espinoza now works as a consultant for Green Gardening Service, a landscaping company based in Chino Hills, Calif. It’s fully committed to being a zero-emission company, so it is only using battery-powered equipment and its vehicles are also electric.

“There is no need to continue to use emission-emitting equipment…”
— Joe Espinoza, Green Gardening Services

He says the commercial properties he works with are particularly interested in the green landscaping approach. “Always lead with green. There is no need to continue to use emission-emitting equipment when there are battery solutions available. The noise level is also reduced significantly.

“We do charge a premium for our services, but it’s not significant and customers are not concerned about the extra cost,” he says.

Espinoza is watching developments in battery-powered technology. He says longer battery life would be an advantage along with lighter shafts for hand-held equipment. He says a big benefit would be “opportunity charges,” using solar-powered trailers. “A guy traveling from one job to another could plug the equipment in and charge it during the half hour commute,” he says.

He’ll continue to rely on The Greenstation for equipment and advice. “They continue to do research, development and testing. They were always that one company that would embrace it when no one else would,” Espinoza says.

Jay Moehring, owner of The Greenstation, Woodland, Hills, Calif., founded his company in 2008 when he saw opportunities to supply battery-powered equipment. 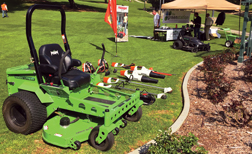 “Basically, we formed The Greenstation when we learned about the SCAQMD lawn mower exchange program, which allowed residents to trade in a residential gas-powered mower for an electric mower at a subsidized price. A few of us got together and sourced a factory overseas to manufacture mowers that we designed, and we started supplying the equipment for people who wanted to go emissions free.

“As we grew, we saw other sales opportunities outside the exchanges. We needed to carry more types of equipment that we didn’t manufacture ourselves, so we started buying and testing everything on the market. We knew the residential market was going to be overloaded with affordable equipment for the homeowner but the commercial market was, sadly, lacking in electric options.

“So, we decided to find all the very best equipment available — at any price. That includes mowers, leaf blowers, string trimmers, chainsaws and the battery technology associated with them. And that’s still our goal today,” Moehring says.

Moehring says they operate differently than most other traditional equipment dealers. “The main difference is that we go out and find our customers. We search them out and conduct demonstrations of the equipment on their work areas. We work with stationary locations such as schools or shopping centers, and we work with landscapers that are mobile and have larger commercial accounts. We don’t actually sit in the shop and wait for customers to come in,” he says.

Moehring says the company is in development now on several products, including a backpack battery powered leaf blower that is quieter and more powerful than current models. They’re also researching options to compete with the Honda 21-inch self-propelled mower that many landscapers use.

“Basically, we’d like to see anything that runs on gas get a battery-powered alternative — tractors, wood chippers, larger mowers, really anything that currently has a combustion engine. What we’re really looking for is the future technology in the actual batteries. We’re looking for smaller, lighter batteries with longer run times and shorter recharge times. And cheap.

“There can’t be any excuse to continue to use gas. The electric car industry is helping drive this technology, and it’s all trickling down to the landscape maintenance industry. We’d really like to jump ahead 10 years and see that everything used in the residential market is gas free and most commercial jobs are, too,” Moehring says.

Q&A with Dan Mabe of the American Green Zone Alliance

The American Green Zone Alliance (AGZA), Studio City, Calif., educates and accredits grounds maintenance crews and certifies properties maintained with cordless electric equipment as AGZA Green Zones. Dan Mabe, CEO, consulted with The Greenstation, a battery-powered equipment manufacturer and distributor, and the landscaping team caring for the city of South Pasadena. He explains the steps that led to the its certification as the first AGZA Green Zone City.

How did you support the transition to electric equipment?

“We shadowed the crews operating the gas equipment and took inventory of work production rates, gas and oil used and maintenance costs. We also inventoried the noise and air pollution of the gas equipment. AGZA then worked with The Greenstation to organize an equipment package with the right tools and battery capacity to handle the gas-free dedicated green zone areas.”

What does a municipality have to achieve to be certified as a Green Zone?

“A municipality has to be dedicated to gas-free routine maintenance. For instance, routine maintenance generally makes up more than 90% of all the maintenance for the city of South Pasadena annually. Heavier industrial jobs, such as rototilling, aerating, thatching and heavy tree work are permitted with gas because no feasible electric options exist on the market yet. A representative for the city must report quarterly to AGZA and work with AGZA to ensure validity and integrity.”

What does a landscaping company have to do to be certified?

Landscape maintenance companies need to pass an AGZA exam, have their electric fleets verified, allow shadowing of their field operations and take an oath to provide dedicated electric service for all routine maintenance work.”

How can dealers become involved?

“This is something AGZA is working on. We are championing some type of incentive program to include the dealers, not just end users and manufacturers.”

Where else across the country are you working to establish AGZA Green Zones?

“AGZA is continually engaging conversations and hosting equipment demonstrations that can lead to Green Zones, and several have already been certified, including Malibu Country Mart, the first commercial AGZA Green Zone, and Torrance American Baseball Fields, the first AGZA Green Zone sports complex. Interest is starting to appear in other communities as well. We have already started the initial phases of a Green Zone on Long Island, N.Y., and several are in the pipeline throughout California and parts of the Southeast.”