PSI scores range from 49 to 150, with the 2019 industry average score a 99. 37% of UTV dealerships nationwide scored over 130, selling effectively and providing an excellent customer experience. In contrast, 42% of UTV dealerships scored under 75, missing most opportunities to help their customer buy the right UTV. 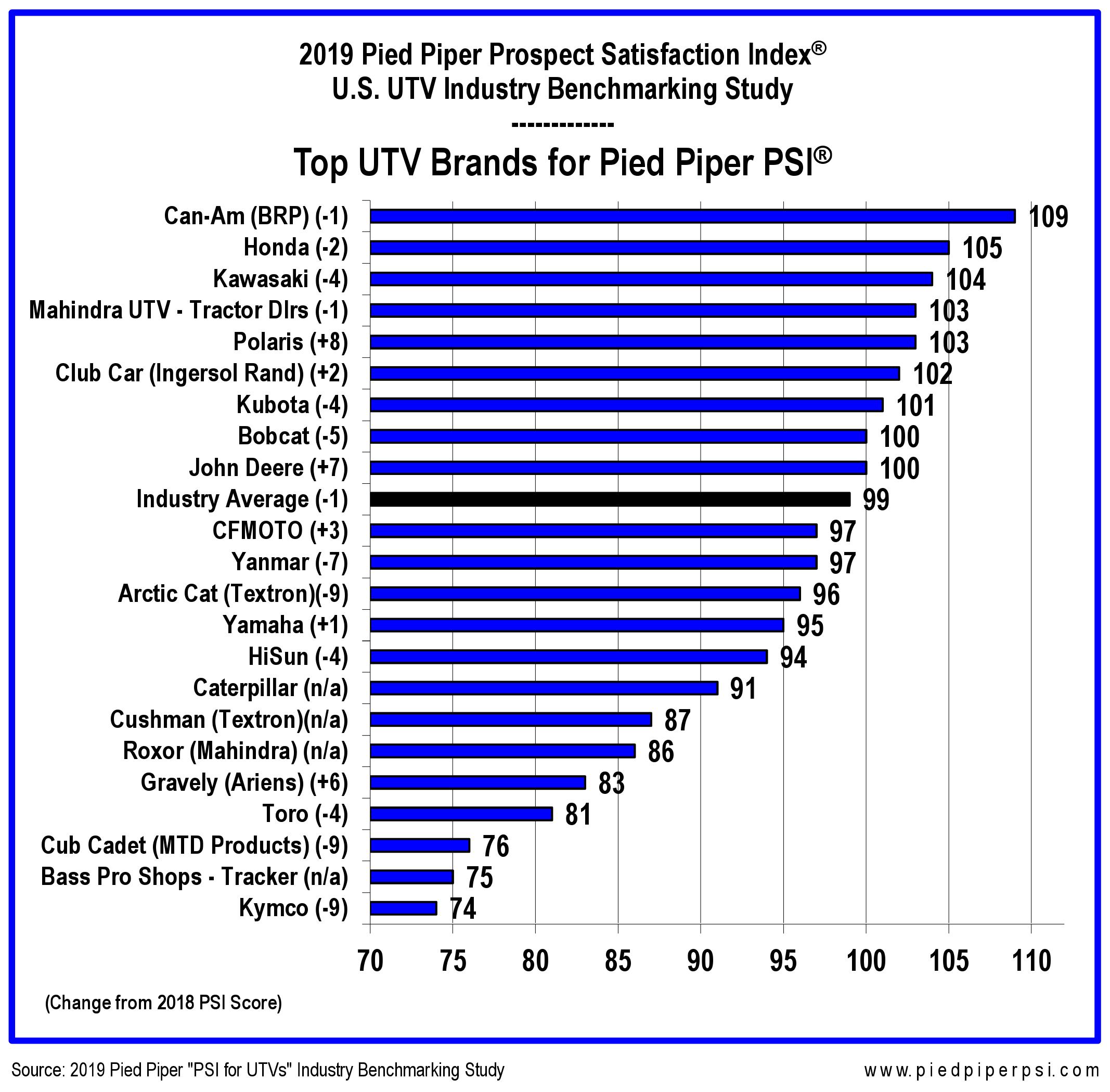 Honda and Kawasaki were ranked second and third, while Mahindra and Polaris were tied for fourth. Other brands scoring above the industry average were Ingersoll Rand’s Club Car brand, Kubota, Bobcat and John Deere. Brands showing the greatest improvement from 2018 to 2019 were Polaris (+8 PSI points), John Deere (+7) and Gravely (+6). Brands with the greatest declines from 2018 to 2019 were Kymco (-9 PSI points), Cub Cadet (-9) and Arctic Cat (-9). Four brands were new to the study this year: Caterpillar, Cushman, Mahindra’s Roxor brand and Bass Pro Shops, selling their Tracker brand UTVs.

Industry average performance declined one PSI point from 2018 to 2019. Behaviors that increased the most from 2018 to 2019 included asking if the customer had visited the dealer website, attempting to set an appointment to return, encouraging going through the numbers or writing up a deal, and suggesting a test drive. Behaviors that declined the most from 2018 to 2019 included suggesting a future test drive, mentioning service convenience options, using lower cost of service as a reason to buy, and discussing features unique from the competition.

Specific sales behaviors vary considerably from dealership to dealership, and also from brand to brand, including the following examples selected from the 60+ PSI measurements:

“Customers today complete much of their shopping online before they ever visit a dealership in person,” said Fran O’Hagan, President and CEO of Pied Piper Management Company, LLC. Fifteen years ago, customers would visit a dealership four or more times on average before buying, compared to less than two visits on average today. As a result, dealership sales teams today must work hard to be helpful to each customer, assuming it may be their only opportunity. “It’s no longer acceptable for a salesperson to act like a museum curator, saying, I’ll be over there if you have any questions,” said O’Hagan.