The company showed off its concept machine at the 2018 GIE+Expo, pushing the possibilities for this high-demand product. Companies have displayed prototypes at the show, however, Briggs & Stratton is among the first to display a true concept, similar to the approach auto shows take when testing futuristic designs.

The mower was not a working model and is not in production. The company said it was very well received by attendees.

“Most people asked, ‘When can I get one? How much is this going to cost? When is this coming out? How fast does it go?’ I think it was very refreshing for a lot of people to see it there,” says Nick Zeidler, industrial design manager at Briggs & Stratton.

“Let's try some ideas that are really different, and it's really to show the ideas and how far Briggs is pushing ideas today. It's probably a lot further out there than people realize, so that's one reason why we wanted to show it,” says Zeidler. 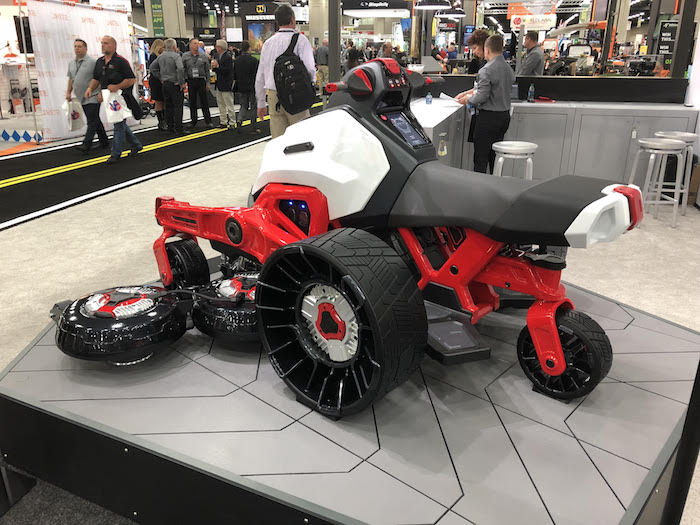 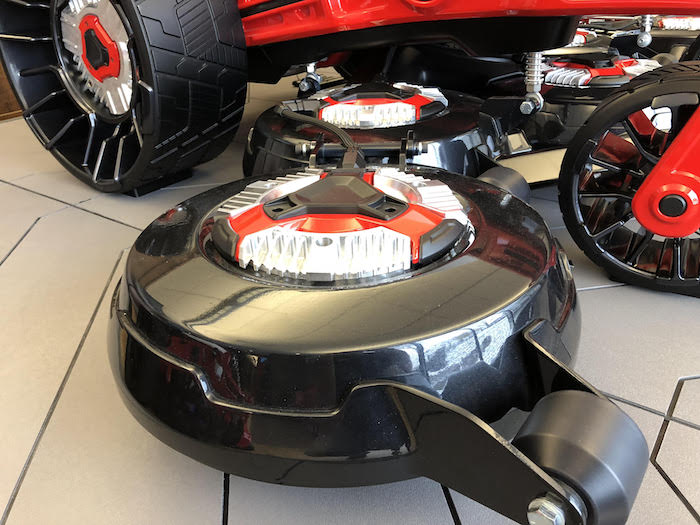 The model’s seating and driving configuration resembles an ATV, which allows for the user to either stand up or sit down. This design provides greater visibility to the operation and ergonomic advantages — allowing the operator to adjust based on preference or to relieve fatigue.

The controls are in a fixed position, like handle bars, rather than the lap bars used on zero-turn mowers today. Zeidler says the controls help users brace if they need to while mowing. The change provides ergonomic comfort and a secure feel while still allowing similar operation to today’s zero-turn mowers.

Adding Power Options
The power module was placed on the front of the machine, which also influenced its appearance. The idea was to provide several power options in a cartridge system and the customer could choose various options to be factory-installed. For instance, the power options might be a traditional internal combustion engine, hybrid power or battery power. With these potential new power sources becoming available, it future proofs the design, says Zeidler.

Electric power allowed for flexibility in the deck design, which includes 5 modules. The deck can be configured based on size requirements, such as placing three in the center and one on either side of the deck. The side modules can be added quickly with a single pin to lock them place. They can also be removed or folded up to easily allow for a smaller cutting deck. This kind of flexibility and functionality is not available on today’s models, says Zeidler.

“Electric power really opened up new ideas for us. We don't have to operate a hydraulic pump and could reduce the input force the user had to provide, which led to the handle bar design,” Zeidler says.

To drive the concept mower, the operator can rotate the inside of each hand grip similar to how a ZTR is steered today. This idea works with the outside of the grip being fixed, which provides a secure point for the operator to hold on to.

Another significant design change was in the suspension system. The rocker arm suspension on the front end allows the operator to increase productivity and move faster than other models, potentially going from 8-16 miles per hour. Wheels on each end of the rocker arm move with the terrain, but the operator only experiences half that movement which provides a smooth ride and confidence cutting at this rate of speed, Zeidler explains.

Thinking Forward
Some of the ideas could be developed by the company, however, the mower itself is not something Zeidler sees going into production. He and the concept team are tasked with looking 5-10 years ahead to explore future product potential. The idea of the mower was to think forward and see what the team could come up, with no constraints.

“This is the direction Briggs & Stratton is looking toward for the future. You’ll see ideas like this coming from Briggs and Stratton, as well as our subsidiary companies,” Zeidler says.